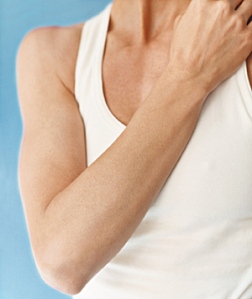 “Just as doing yoga is playing the edge between control and surrender, there is also an interplay between transformation and resistance to change. There’s no way to remain the way you are now: you either become more rigid and crystallized, or you break out of patterns and transform.” -Joel Kramer

The day before the new moon’s arrival on July 30th, I spent the afternoon in the yard…once again, attacking weeds. A day later, when the first signs of poison sumac started to reveal itself on my skin, I realized that the weeds had attacked me back. It took me awhile before I stopped and noticed the symbolism of my newfound allergic reaction (side note: I’ve touched poison ivy before and never had a reaction to it). But here it was: a glaringly obvious physical manifestation of my weakened immune system –just toss it in the ailment bucket with Lyme disease and whooping cough– and my subsequent transformation…whether I was ready for it or not.

There’s no denying the bizarre coincidence between the major shifts that occurred in my life around the time of the lunar eclipse on June 15th and the new moon on July 30th. While lunar eclipses are typically a time to shed “emotional debris,” new moons provide an opportunity for transformation. And as most of us know, nothing weakens the immune system more than a broken heart. So I can’t help but wonder if the Universe decided it would use the example of poison sumac to really drive the point home.

In yoga, transformation occurs when we stop resisting…a pose, our body, or our way of thinking. We enter a state of expansion only when we learn how to stop contracting, or constricting, ourselves. As Joel Kramer points out: “Real growth and transformation move you not only from things you don’t like, but also from pleasures and habits you’re attached to.” Becoming aware of these habits, and to which things (and people) we are attached, is the first step in self-transformation. But trust me…this kind of transformation doesn’t happen overnight. It is nature at its finest: slow or fast, ugly or beautiful, joyful or painful. But when it does happens, you’ll know. Just as I now know that my bout with poison sumac is actually healing me.